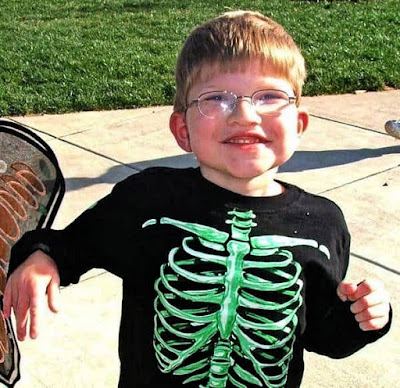 A few lines about Dror. (That's not his real name and this is not his photo - for reasons of preserving everyone's privacy. All the other details, though, are factual and true.)

He's not an illness, not a statistic, not someone's challenge.

Dror, a sweet child, is a young energetic person with a life ahead of him, who lives with his family on a kibbutz in Israel's south. He is four years old.

Dror was born with a rare condition called Pitt-Hopkins Syndrome, characterized by intellectual disability and developmental delay. Some 70% of people who have this syndrome are unable to speak.

But from the outset, Dror’s parents decided he would be amongst the 30% that do speak.

To achieve their goal, Dror needs intensive speech therapy. He gets some of that in his kindergarten. But ambitious goals call for extraordinary efforts and that's what Dror's family is ready to make. Unfortunately the family’s kupat holim (in American terms, its HMO) declined the opportunity to fund the essential extra therapy sessions.

Which is where the Malki Foundation stepped in.

Lisa, the speech therapist assigned to Dror via the Malki Foundation's Zlata Hersch Memorial Therapists on Wheels Program, has been working with him and his family now for about two years. And at this point, Dror can already say eight words!

Dror’s mother recently wrote us a note (in Hebrew - the translation is ours):


“I truly believe in the education provided to Dror at the special-ed school he attends. But I believe even more that the people with whom he is most motivated to communicate are with my husband and me... We live in an area where it is extremely difficult to find a therapist. Thanks to you, we received Lisa and have learnt how to be more exact with Dror’s needs, and to develop communication with him.”

Home therapies are vitally important to achieving the best outcomes for so many of the children whose families we support. We are honored to be part of Dror’s continued growth!