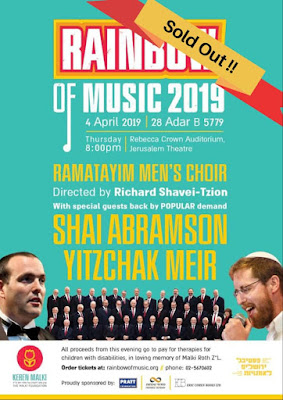 In certain respects, the Malki Foundation's Rainbow of Music concerts, annual events in Jerusalem and Ra'anana, walk a thin line.

On one hand, an evening of joyous celebration of life and of the music that brings delight. On the other, a serious purpose - raising charitable funds for a terrific cause - tied to tragic circumstances, the murder of Malki Roth in the 2001 Battle of Sbarro in Jerusalem.

The Malki Foundation was established in 2001 to become a living memorial to Malki's beautiful life.

Last night's fabulously successful concert in Jerusalem came with an additional layer of paradox and complexity.

Shai Abramson, who along with Yitzchak Meir was one of the concert's featured performers, happens to be the Chief Cantor of the Israel Defence Forces.

And yesterday evening that senior IDF role caused him to be late in arriving at the Jerusalem Theatre for the Malki Foundation event. He was the hazan (cantor)
leading the prayers at the funeral of a soldier who fell in battle nearly four decades ago:


Sgt. First Class Zachary Baumel was laid to rest in Jerusalem’s Mount Herzl military cemetery on Thursday evening, nearly 37 years after his death in the First Lebanon War’s battle of Sultan Yacoub in 1982, at the age of 21. Thousands turned out for the ceremony, where Baumel — whose remains were returned to Israel days ago after a complex IDF intelligence operation and with central Russian assistance — was eulogized by President Reuven Rivlin and Prime Minister Benjamin Netanyahu, among others. Also attending were Baumel’s family, friends, IDF Chief of Staff Aviv Kohavi, former chief of staff Gabi Ashkenazi, Culture Minister Miri Regev and top officials from the IDF’s armored corps, Baumel’s unit... ["After 37 years, Baumel buried in funeral touching ‘deepest part of our identity’"]

Still in  uniform (which he soon shed for the rest of the concert), he launched immediately into a soaring rendition of an especially moving song made famous by its role in the smash hit musical, Les Misérables. The title makes clear why Shai wanted it to be his opening, in place of the playlist appearing in the programme: Bring Him Home.

You may not be surprised to know that many in the theatre were left dealing with specks that suddenly affected their eyes.

We plan to be writing again soon about Thursday night's memorable concert.