A child is now walking 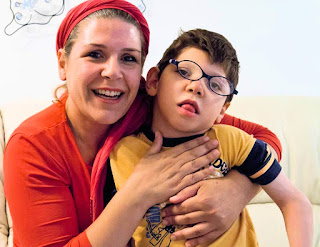 Chaim's mother has just called to tell us that he is now walking with a walker!

Chaim has been with the Malki Foundation for 4 years [background] and has progressed so much.

When we wrote about him earlier, he had suffered epileptic attacks that made him unable to move on his own.

His mother, E, has done everything in her power to get Chaim the therapy he needs. And with incredible results.

This past June, we visited him at his home and he was moving around, laughing and playing with his therapist on a floor mat. And now, a few months later, he is walking.

This is the power of dedication - from his family, his therapist and the Malki Foundation. We all believe in Chaim. And he has shown us how far that belief can go.

Email ThisBlogThis!Share to TwitterShare to FacebookShare to Pinterest
Labels: Therapies at Home