How to channel funding away from institutions and into structures that help Israeli children live with their families and communities? 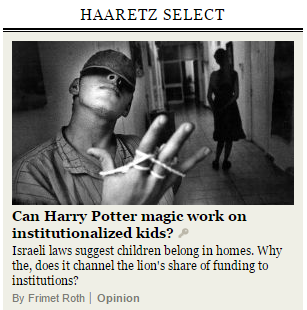 A version of the op-ed below, authored by Frimet Roth, appears prominently in today's English-language newspaper edition of Haaretz as well as on the news site's homepage.

Despite its commitment to citizens' self-determination, Israel pumps the lion's share of state funding into institutions. It's high time the government redirects that money into supporting these children's right to live with their families and in their communities.

People with severe disabilities have a friend in J.K. Rowling. Her global offensive against institutional residences will ensure they live better lives within their communities and – if that is what they want – with their own families.

Rowling’s vision probably baffles many Israelis. Here, institutions are revered, attracting generous private donations and government assistance. The media rarely criticizes them and the public generally considers them a godsend.

But experts throughout the world denounce institutions. Heeding their calls, first-world countries have been shutting down their large, closed institutions for children and young adults, sending them to their own families, adoptive families or small group homes in the community, and providing them with government-funded assistance instead.

"Institutions are poor substitutes for a nurturing home life, even if they are well run and monitored," UNICEF writes in its annual State of the World’s Children report for 2013. The harm to children of institutionalized care has been widely documented and, according to a 2009 study by the world’s leading independent children’s rights NGO, Save the Children, "several successful models of family and community-based care have already been developed."

It would appear that Israel supports keeping people with disabilities in their homes or communities rather than institutions. The Equal Rights of Persons With Disabilities Law (1998) mandates equality for the disabled and the right to make decisions about his life. A 2000 amendment to the Welfare (Care of Retarded Persons) Law, 5729-1969 requires that preference be given to residences within the community when placing individuals outside their homes.

Furthermore, in 2012, Israel ratified the United Nations Convention on the Rights of People With Disabilities, which guarantees their right to live within the community and to be accorded “access to a range of in-home, residential and other community support services... to prevent isolation or segregation from the community.”
Several of Israel’s own academic experts also vehemently oppose institutionalization. Professor Arie Rimmerman of Haifa University’s Faculty of Welfare and Health Studies decries Israel’s exclusion of people with disabilities from the general community. He cites studies showing that residents of institutions transferred to the community significantly improved their quality of life, health, social skills and behavior.

Yet, sadly, the laws, expert exhortations and dire statistics have had only minimal impact. According to the Social Affairs Ministry, more than 12,000 Israelis with disabilities still languish in institutions that continue to expand.

The lion's share of government funding in Israel goes to institutions, according to a major 2014 study by the Joint Distribution Committee. Aleh, the largest institutional residence in Israel, alone receives $24 million annually. Meanwhile there is a serious shortage of services to people with disabilities who live within the community.

Schools for children with profound disabilities living with their families – as my 19 year old daughter does – survive on shoe-string budgets, heavily dependent on charitable donations. Staffing levels are meagre and the number of para-medical therapies provided by the state is grossly insufficient.

Rather than funneling the majority of government funding into institutions, Israel should provide social grants, subsidies for transportation or funding for personal assistants or respite care, as recommended by UNICEF.

Diverting government funds from institutions would improve educational standards for children living at home and would make possible subsidized household help and para-medical therapies. All this would enable parents who might otherwise institutionalize their children to keep them at home.

Why does Israel, a leader in medicine, science and technology, lag so seriously in this field? How is it that proponents of institutionalization mold the Israeli ethos?

Obstacles to change abound. Decision-makers are often unable to fathom family-based care and lack the resources to fund and manage it. Personnel at institutions fear losing their jobs, and the stigma factor can cause communities to reject housing for people released from institutions.

Public relations also play a key role. Frequent media releases portray Aleh, for example, as a “dream home” with “state-of-the-art medical, educational and rehabilitative care." The institution also says its residents are incapable of surviving outside of hospitals or institutions – a dubious claim, given the syndromes that it states afflict its residents.

Still, in various other countries – including Bulgaria, Moldova and others in Central and Eastern Europe – governments, professionals and communities have united to develop individually-tailored community-based health care, education and social services
Such initiatives are feasible here too. But it will take a mentality shift and a brave government that is willing to channel funding away from institutions and toward families and communities.

"I can think of nobody more powerless than a child, perhaps with a mental or a physical disability, locked away from their family,” writes Rowling.

As my daughter’s care grows more challenging for us each day, I fervently hope that Israelis will be similarly inspired so that Rowling’s dream can be realized here too.

Frimet Roth is a freelance writer in Jerusalem. Her daughter Malki was murdered at the age of 15 in the Sbarro pizzeria bombing in 2001. With her husband Arnold, she founded the Malki Foundation (www.malkifoundation.org); it provides concrete support for Israeli families of all faiths who care at home for a special-needs child.