Some great news from the United Kingdom. This article appears in today's edition (September 19, 2014) of the Jewish Telegraph, UK:

YEAR Nine pupils at King David High School are set to develop ideas to raise money for an Israeli charity.

They gathered at a special assembly on Wednesday for the launch of the Keren Malki Project.

The school has teamed-up with the project as its chosen charity for when the pupils head to Israel next year.

Jewish studies teacher Rabbi Jonathan Goodman, who is heading the project, told them about the charity's background and how they will make an impact.

The Malki Foundation was started by the Roth family, whose daughter Malki was killed in the Sbarro restaurant suicide bombing in Jerusalem in 2001.

It supports families of children with disabilities.

The KD pupils have set a £12,000 target, which will allow the charity to purchase equipment which helps special needs children with muscle development, skeletal growth, increased bone density and social development and integration.

The students were shown a short film produced by the Roth family, which highlighted the key concepts of how the foundation has impacted on both parents and children.

Rabbi Goodman said: "These pieces of equipment will help children up to 19-years-old and are able to be reused to help the lives of many for years to come."

Each student will try to raise £100. Rabbi Goodman told the students: "We have to understand who Malki was.

"Only after a person has died is when we start talking greatness of them.

"We should appreciate the people around us when they are alive."


As part of the discussions with King David School's senior people, The Malki Foundation's management team here in Jerusalem and in Manchester came up with a design (see it above) for a charity (tzedaka) box to be given to the KDS students taking part in the new project.

Meanwhile on the King David School website, they posted this on Wednesday:

This morning Year 9 main school, Yavneh Boys and Yavneh Girls were introduced to this year's school charity, Keren Malki. The Keren Malki Foundation seeks to support families of disabled children in Israel with resources to help their children at home with chairs, seats and therapies in order to realise an active life. 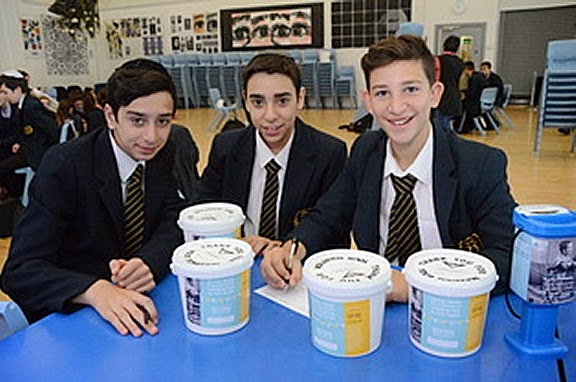 Over this next year KDHS hope to raise £12,000 to support the Keren Malki Foundation.

A great initiative - we wish well to all those involved.