About David who can now pull himself across the floor unaided 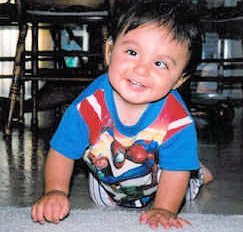 David is now two and a half years old.

Here at the Malki Foundation, we have known him for most of his life. (Of course, we also know David is not his real name. In telling about our work, we try hard to avoid using either the real names or the real photos of the children whose families we support. Naturally, everything else we share about David and the other children is entirely true and unembellished.)

Born with a rare and difficult genetic condition, CHARGE Syndrome, he is affected by severe development delay, hearing loss and blindness.

When he was seven months old, David's mother turned to the Malki Foundation for support via our Therapies at Home program. That's where the lion's share of the funds we have raised from supporters since 2001 goes.

She explained that David would lie on his back all day long unable to turn his head or even hold it up. He had limited use of his hands and had serious difficulty with his eating due to severe oral muscle weakness.

David, she explained to us, needed intensive one-on-one physical and oral therapies. They were the key to strengthening his muscles and ensuring that he would acquire the ability to feed himself.

Another crucial goal was to benefit from speech therapy in order to develop his verbal communication skills; David’s blindness makes it impossible for him to lip read.

Four months into the therapies program that the Malki Foundation's support was instrumental in enabling, David was already capable of rolling from front to back and from back to front. He could hold his head up and clap his hands. He could touch his head when requested, and he could and did wave back when someone wished this sweet young man “shalom”.

In her latest update letter to us, David’s mother writes:

“Physically he has progressed tremendously… The therapies have enabled him to pull himself across the floor alone. He seems such a bright child with so much potential.”

As with every single other other child in the Malki Foundation's programs, we are intensely proud and pleased to be part of David’s journey. We look forward to following his growth and seeing him reach the milestones that await him.
* * *

No fewer than eighty families from every part of Israel's political, ethnic and religious spectrum are currently on our waiting list, waiting to see their child benefit in ways similar to how David and his family have.

We simply don't have the money to admit them. This is a terrible shame. If you can help us make the waiting list a little smaller by clicking here, you will have our sincere appreciation.