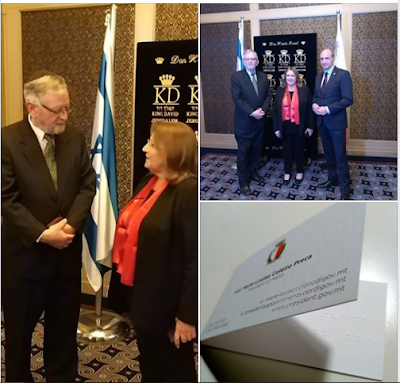 Last night (January 29, 2019), Arnold Roth, founder and chairman of the Malki Foundation, accompanied by Malki Foundation executive director Debbie Fishman, had the honor of presenting our important work over dinner to Her Excellency Marie-Louise Coleiro Preca, President of the Republic of Malta, along with her parliamentary entourage who are currently visiting Israel.

Appointed to her important role in April 2014, and possessed of an uncommonly strong social consciousness, the president was interested to learn about people with disabilities in Israel and what help is available for them.

That same year, Ms Coleiro Preca announced the formation of The President's Foundation for the Wellbeing of Society, a non-profit consultative and research entity advising the President of Malta on initiatives to help improve social inclusion and standards of living.

She explained about how in Malta, people with disabilities are totally integrated into society - from mainstreaming in school through to gainful employment.

And notice her business card - one side English and one side Braille!

Our sincere thanks to Israel's Ambassador to Malta Eyal Sela and the Maltese Ambassador to Israel Cecilia Attard Pirotta for being instrumental in setting up this interesting and enlightening evening.