Giving as remembering: Lessons from teenagers

The anniversary of the date of the murderous Hamas attack on the Jerusalem Sbarro pizzeria is rapidly approaching.

Every summer for the past 13 years, the graduating group at Malki's youth organization (it’s called EZRA) sits down and organizes a public fun fair and bazaar. It runs from mid afternoon until late at night in a small and pleasant public park just near where Malki lived, and her family still lives, on Jerusalem’s north side.

A second version takes place in Maale Adumim, a desert community on Jerusalem's eastern margin where Malki served as a youth leader in the last year of her short life.

That Jerusalem park happens to abut the building that serves as the local clubhouse for EZRA.

When it was just a few weeks old back in 1997, the Roth family rented the neew building for an evening and held Malki’s bat mitzvah party marking her twelfth birthday and in traditional Jewish terms, her coming of age.

On that fateful night 14 years ago, August 9, 2001, in the hours after the massive explosion in the center of Jerusalem, the same building was filled with hundreds of youngsters from the community. They had spontaneously arranged a prayer vigil while a search went on for the two girls - for Malki and for her friend Michal Raziel. They had been spending a fun day together right up until contact with them was lost when the bomb went off. Almost everyone in that young crowd knew them personally.

By the mid-afternoon hours of that hot Thursday in August 2001, the families of the two girls knew that Malki and Michal had been inside the Sbarro pizzeria when the terrorists attacked at two o'clock. In the chaos, what had happened to them was not immediately known and remained a mystery for some time. Michal's death became public knowledge by early evening. For the Roths, it was not until 2 o'clock the following morning before they learned what had been done to their daughter.

That same park, on a warm September 2001 night a month after the Sbarro massacre, was the site of of a public memorial event - an azkara (a memorial event) to allow friends, neighbours, families and the suburban community to come together to express their grief, collectively and privately, at the loss of two such beautiful, innocent, good lives.

The agony of that evening remains etched in many memories because of what else had been happening during the afternoon and evening leading up to it. This was the night of September 11, 2001. Today we call it 9/11.

The EZRA fun day that we mentioned above is held annually in memory of Malki and Michal. It's a busy, well-run event arranged entirely by youngsters of 16 or 17, and all the proceeds go to charity. This year’s will be the 13th such fair and is set for this coming Monday afternoon and evening, July 27, 2015.

(A second fair, in nearby Maale Adumim, is scheduled for Sunday, August 16, 2015. Malki was a young leader of even younger children in the Maale Adumim branch of EZRA in her last year of life.)

Why do Israeli children who have lost parents, siblings, friends to acts of overt hatred, respond by doing acts of charity and declarations of brotherly and sisterly love? Arnold Roth, Malki's father and honorary chair of the Malki Foundation, offered an opinion in a blog post of his last year. Here's part of what he wrote:


It’s not so obvious. They’re busy kids at the end of their final year of high school. The boys are weeks or months away from starting their army service, so they probably are grappling with complicated thoughts. Most of the girls will be starting their national service (most girls of religious orientation do this in place of army service, but some do go into the military) and are aware of the challenges ahead.
Still, when they take time out to do something as a cohort of friends, a collective action, it’s about charity and remembering and – their choice of word – love. Should that be obvious?
It’s hard not to make invidious comparisons with what we see in the news from other parts of our region: young men and women, strapping bombs to their chests and expounding on how anger and pride demand that they kill people and perhaps themselves as well. We’re all too familiar with the horrifying dynamic.
But over here, the dynamic is about recruiting vendors who will set up tables to sell school books, pens, small household appliances, decorative objects and works of art, clothing and gifts. They find jugglers, food-stall operators, people who will install inflatable bouncies in the shape of castles or large animals which delight the toddlers who are brought by their mothers. The volunteer team, high school kids all of them, advertise the event by flyers distributed throughout Jerusalem; by ads in bus stations, synagogues, message boards and other key locations. Emails, Facebook pages, word of mouth.
And it’s not just in our neighbourhood. People of all ages have addressed the painful memories of their own lost loved ones by creating worthy undertakings, concerts, park benches, small libraries, and on and on throughout Israel. Our Malki, all of fifteen years old when she did it, served as youth leader for a group of Maale Adumim's nine year old girls.... When the youngsters there hold their own memorial fair (of course, with proceeds to charity) in Malki’s memory as they do year after year, we remind ourselves that the cohort of friends now taking charge were only six or seven when Malki was alive. They cannot really have known her. Yet they understand the symbolism. It resonates with them. [More]

The poster at the top of this article is in Hebrew. The key information is:

Below are some snapshots from last year's EZRA Ramot bazaar: 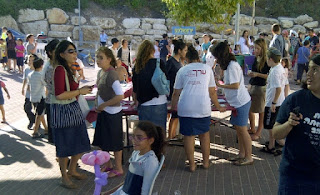 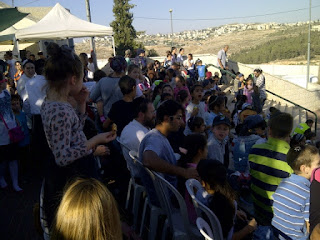 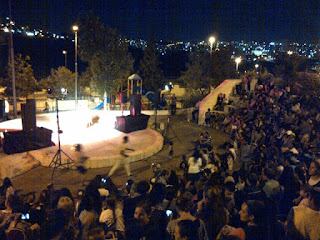 Let us know [malkifoundation@gmail.com, or phone 02-567-0602 in Jerusalem] if you need directions to get to either of the two charity fairs.